This blog is aimed at the person with the Lewy body disorder, and especially at the person with PD. That’s because we were at a Parkinson’s support group when a gentleman asked us this question: “What about depression? Why am I so depressed? What can I do about it?”

The answer is two-fold. First, there’s the chronic (long-lasting) depression, a common Lewy body related symptom. People with a Lewy body disorder are much more likely to be depressed than those with Alzheimer’s. This type of depression is probably chemically related; that is, there is a lack of one of the body’s happy-inducing chemicals such as serotonin. This usually needs to be treated medically. Fortunately, there are drugs, such those in the SSRI family and several non-benzodiazepine based anti-depressants, which are usually fairly Lewy-safe.

Secondly, there’s situational depression, brought on by the losses that anyone with a degenerative disorder is apt to experience.

The gentleman nodded. “In the last year or so, I’ve lost my health, wife and my home.”

Well, that’s enough to make anyone depressed! The good news is that situational depression is usually shorter term and more receptive to non-drug interventions.

Talk about it.“You are talking,” we told the gentleman. “That’s the first step. You are already on your way to feeling better!”

You have to own where you are before you can change. Guys, especially, tend to bottle up anything like depression that might make them appear vulnerable and weak. Talking is not about being negative but about being open and honest and willing to ask for help. If you feel sad, don’t hold it in. Find a supportive ear and talk about what’s bothering you and how you feel. The listener’s job is not to tell you to shape up, but to listen, and then help you find ways to decrease the depression—some of the following, for instance:

Exercise. Most PD people know how important exercise is for slowing down their motor symptoms. LBD people know how important it is for slowing down the cognitive symptoms. Exercise is also a great deterrent for depression. It adds some of those chemicals that may be lacking and just plain makes a person feel better. “But”, we’ve heard, “My health doesn’t allow me to exercise—bad joints, bad heart, wheel-chair bound, etc., etc.” Nevertheless, there are still ways to exercise, perhaps only moving one’s arms, or even passive exercise, where someone else moves the limbs. A half-hour a day at least three times a week is recommended, but if you can only do five minutes at a time—do it. Do whatever you can do as long as you can. That’s ever so much better than none at all.

Socialize. Connect with people. We are social animals. Isolation tends to lead to depression and makes it worse when depression is already present. Get out and be with people. Play cards, visit, go out to lunch, or a movie. Or do more physical things like play tennis, or golf if you are able. Don’t worry about the score—just play. Or go for a walk. Make the walk in a place like a mall where other people are around. Then smile and keep track of how many people you have to smile at before someone smiles back. Just that small connection is very healthy.

Be positive. Depression makes it much easier to be negative than positive. Make an effort to put everything into a positive context, even if you have to stop and reword it as you go along. In the same vein, make an effort to be around people who are positive. Being positive is as catching as negativity is! Try not to use words like can’t, or won’t or don’t. Instead of saying, “I can’t walk fast,” say, “I take my time.”

Medication. Even with situational depression, the above medications can sometimes be beneficial for caregivers as well as their loved ones for a short period of time, just to get over the first hump. A future blog will be about depression and caregivers.

Read more about depression and LBD in our books,
A Caregiver’s Guide to Lewy Body Dementia
Managing Cognitive Issues in Parkinson’s and Other Lewy Body Disorders

Learn more about dealing with Lewy body disorders at LBDtools.com

Email ThisBlogThis!Share to TwitterShare to FacebookShare to Pinterest
Labels: depression 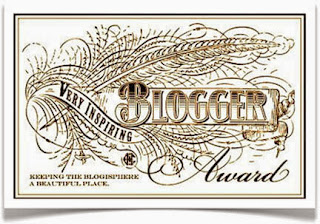 I’ve been nominated for the Very Inspiring Blogger Award. Thank you to fellow blogger, Joy Walker, for this exciting and totally unexpected honor. Be sure to check out her equally inspiring blog, 3 Years and 13 Dumpsters: Cleaning House After Dementia.

Here are seven facts about me:
1. I’m a true westerner; I grew up riding a horse instead of a bicycle and never got further east than western Montana until I was over 50.
2. I married right out of high school and had three children by the time I was 21. Then I attended college along with my oldest daughter.
3. I’m a retired nurse who specialized in substance abuse and counseling—not dementia! That came after retirement--and even after my caregiver experiences below.
4. Since retiring, I’ve been a family caregiver for family members with a variety of problems from motorcycle accident injuries to Parkinson’s to cancer.
5. I square danced off and on for years and always loved it. That was the way Jim and I met!
6. I’m now married to my wonderful husband, Jim Whitworth, whose mission to spread the word about LBD drives my writing. We are sunbirds who live in Arizona and spend summers in the Pacific Northwest.
7. I love nuts. Anything tastes better with nuts!

I recommend any and all of the blogs in this blog’s sidebar. Many are about LBD, but some are about brain health and others are about alternative ways to treat LBD and other neurologic disorders. I also recommend these Facebook pages:
1. Memory People
2. Treasures in the Darkness by Pat Snyder

Email ThisBlogThis!Share to TwitterShare to FacebookShare to Pinterest
Labels: award

We’ve been visiting Parkinson’s groups this summer and talking about our book—about the cognitive aspects of PD. Many of the issues in these groups are very similar to those in the LBD support groups that we’ve attended in the past. But some are different.


We really enjoyed our visits because the group members always had lots of questions and they taught us lots too. We hope to visit many more.

Learn more about how PD and LBD relate from our books:
A Caregiver's Guide to Lewy Body Dementia
Managing the Cognitive Issues in Parkinson's and Other Lewy Body Disorders
Posted by The Whitworths of Arizona at 8:53:00 AM 3 comments:

Atropine for Management of Secretions

We recently received a query about the use of atropine instead of suctioning to manage secretions and help a person in the end stages of life breathe easier. Neither one is a perfect solution. Suctioning can temporarily remove secretions and ease breathing. However, it can be traumatic and can damage the delicate linings of the mouth and throat.

Atropine is an anticholinergic. As LBD caregivers, the idea of using any kind of anticholinergic is scary. We know that this family of drugs can cause a person with LBD a multitude of side effects, such as severe sedation, general confusion, hallucinations, delusions,restlessness and more. We’ve been warned repeatedly to avoid such anticholinergics as Haldol or Ambien. But maybe there is a time for at least this one drug—or one of its sisters. One side effect of anticholinergics is that they cause a dry mouth—that is they inhibit the secretion of saliva. Atropine and several similar drugs are used especially for this.

Some anticholinergics, including atropine, cross the blood-brain barrier more easily than others. These are the ones we fear most because the brain is where they cause those unwanted side effects. However, glycopyrrolate (Robinal) and hyoscyamine (Levsin, Levbid, etc.) are less able to cross the blood-brain barrier and are therefore less likely to cause these symptoms. This means that they might be a better choice than atropine for our loved ones.

The side effects of anticholinergics are usually dose-related. Because LBDers tend to be overly sensitive to these drugs, a normal dose may act as an overdose but a much smaller amount may work well with few if any unwanted symptoms. Everyone responds differently and so it is a trial and error process, starting with the smallest possible dose of the drug most likely to cause the fewest problems. Then the hospice nurse increases the dose until it works or there are problems. If that drug doesn’t work—or isn’t available, you move on to the next drug and start over. With LBD, nothing is cut and dried!

One caregiver suggested using an albuterol nebulizer. This drug is used to relax bronchial spasms and may make it easier to get up secretions that are deeper than simple saliva. It is also not an anticholinergic and so it is worth a try before you go to the stronger stuff!

Education may be all that’s needed. When a dying person loses consciousness or becomes too weak to clear their own secretions, the secretions accumulate in the lungs. As air passes over these secretions during inspiration and expiration, it can cause a noisy, rattling sound. By the time this occurs, patients usually have decreased awareness and so the presence of secretions can often be more distressing to family members than it is to the patients.

Another aspect of education is the idea that during the end stages, comfort becomes more important than function. This can be difficult to accept, especially when you’ve been so focused, probably for years, on maintaining function and awareness. But now, it is comfort that is needed. This means that a drug such as atropine, which at one time would have been rejected out of hand, may now be a serious consideration.

Much of the information in this blog was from an article by Melissa Gray: The Use of Anticholinergics for the Management of Secretions.

You can find more information about LBD and caregiving in our books, both available on LBDtools.com.

Posted by The Whitworths of Arizona at 6:55:00 AM No comments: