Our Latest Book is Out! 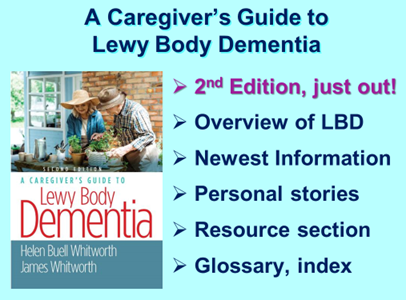 Thanksgiving is over and Christmas is coming soon. We have the perfect gift for your helpers and family members who want to know more about LBD.
A Caregiver’s Guide to Lewy Body Dementia, first published in 2010, has been called the LBD caregiver’s Bible, or Go-To-Book for years. And now there’s a 2nd Edition, with the newest facts as well as more information. For example, we’ve learned more about non-drug management of behaviors since the first book was written and this edition shows that. One of the complaints about the first edition was that the resource section was lacking. The resource section in this one is robust! Readers of our other books will recognize our easy-to-read but informative style using personal stories to illustrate well-researched facts.
Springer, our publisher, is offering our readers a great introductory deal, good only for two weeks, starting today. Go to the Springer website and use the code  WHITWORTH20 for a 20% discount and free shipping in the continental US. There's no limit on the number of orders you can do. Therefore, in addition to the book or books your order for yourself, you can make separate orders and have Springer send books directly to distant relatives or friends. A great way to cross off some of the people on your Christmas list!
The book sells for full price on Amazon, with free shipping only if you are an Amazon Prime member. Be sure to check that you aren't buying from a 3rd person seller. The first edition is out there all over and if you get it instead of the 2nd, you may be stuck with it. Amazon is also offering a digital version but it costs almost as much as the paperback! I wouldn't bother unless you especially love digital books!
We found a few other places online that offer the book, but we'd recommend staying with Springer or Amazon where you have a better idea of what you are getting.
For more information about Lewy body disorders, read our books:
A Caregivers’ Guide to Lewy Body Dementia
Managing Cognitive Issues in Parkinson's and Lewy Body Dementia
Responsive Dementia Care: Fewer Behaviors Fewer Drugs
Lewy Body Dementia: A Manual for Staff

Next Thursday is Thanksgiving. It won’t seem like it for us…and for many of you, I’m sure, because we won’t be having any big family get-togethers.

But we still have so much to be thankful for:

Our heath. As most seniors, we have our issues, but for the most part, we are doing very well. And in Arizona, we have good health care. We’ve learned to use telehealth and email for some of our doctor visits and I suspect that won’t change when things get back to “normal.”

Our home. We are so grateful to have a comfortable home in which to ‘”shelter in place.” We have stopped traveling to the PNW in the summer and so we appreciate our home even more now.

Our family: We don’t get to see them as often, especially now that we don’t travel, but we know they are there and they keep in touch with us.

Our finances: We aren’t rich but as retired seniors, we haven’t lost our jobs and we can pay our bills.

Our friends: We feel so fortunate to live in a small community where we can gather with a few friends albeit, at an acceptable distance, but still face to face (or mask to mask!).

Our readers: Of this blog, our website and especially our books. You keep us active and involved!

What is on your list? It is likely different from ours but similar too. We hope you are taking care of yourselves, getting the help and respite you need and staying in contact with family and friends, digitally if not in person.

We have one last thing for which we are thankful:

Our most recent book has just been published: A Caregivers Guide to Lewy Body Dementia, 2nd Edition. Next week’s blog will be all about it and the special offer that our publisher is offering just in time for Christmas presents.

Email ThisBlogThis!Share to TwitterShare to FacebookShare to Pinterest
Labels: Thanksgiving

Area Agency on Aging: Your Go-to for Resources

We talk a lot about how caregiving can be tiring and overwhelming. But it can also be expensive. We recently received a flier warning us that the Arizona state home improvement grant for caregivers ends after 2020. This reminded me that, with life in even a good care facility so isolating during this difficult time, many of you are likely looking for ways to keep your loved one home.
If you don’t live in Arizona, you can check with your local Area Agency on Aging to see if something similar is available in your state. Also check to see if there are any Covid-related funds for caregivers. In fact, make your local Area Agency on Aging your go-to resource center for senior care. Visit the national Area Agency on Aging (AAA) website to find out where to go in your community and for lots of other valuable information.
The AAA article, Free and Discounted Services for Seniors and Their Caregivers is a great resource all by itself, offering sources and a small amount of information for each service. Do go to the article, but for now, here are many of the sources:

Next week is Thanksgiving and we are taking the week off. Everyone enjoy a safe and happy holiday. The next blog, on December 4th, will be about more web resources for care partners.

Helen and James Whitworth are not doctors, lawyers or social workers. As informed caregivers, they share the information here for educational purposes only. It should never be used instead of a professional's advice.
Posted by The Whitworths of Arizona at 6:24:00 AM No comments:

Frank started hallucinating well before he had other LBD symptoms. I would just kindly tell him, “Yes, I know you see them, I can’t. They aren’t real—they’re a symptom of your Parkinson’s.” He’d nod and that would be the end of it. Of course, sometimes, he liked to share his “visions” with me because, he said, they were so entertaining. We’d laugh but we both knew that what he was wasn’t real. But that has changed. He doesn’t believe me when I tell him I can’t see what he sees so clearly. – Mary

Learn: Lewy bodies that start in a person’s movement control center cause Parkinson’s but in time, these damaged proteins tend to migrate to other areas of the brain. When they migrated to Frank’s visual perception center, he:

When Lewy bodies spread into the cognitive areas of Frank’s brain,

These hallucinations may be less stressful for Frank than Mary, who sees them as a step towards dementia. However, by monitoring and changing her behavior, she can lead Frank—and herself—to a more comfortable place for both of them.

Emotions and Empathy. Most hallucinations are benign, that is they don’t trigger strong emotions. The problem often lies with the care partner:

Mary can change this by:

Acceptance and Alliance. For her own peace of mind, Mary must

Deflect and Do. If the hallucination is stressful to Frank:

Entertainment and Enthusiasm. As with any other unwanted behavior, distraction will help Frank to move further away from the experience so that it isn’t retriggered. Distractions need to be:

Residual Emotions and Response. These may not be as big an issue with benign hallucinations as they are with other behavior. With unsettling hallucinations, including those Mary doesn’t accept as Frank’s reality:

Helen and James Whitworth are not doctors, lawyers or social workers. As informed caregivers, they share the information here for educational purposes only. It should never be used instead of a professional's advice.
Posted by The Whitworths of Arizona at 7:14:00 AM No comments:

This blog, which addresses accusations and extreme anger, continues to follow Mary as she learns to use the LEADER Principles of Interaction to deal with Frank’s dementia-related behaviors. If you haven’t read at least the first blog in this series, an overview of what LEADER stands for, it is a good idea to do so now.

Frank has always trusted me but now he had become very suspicious. He accuses me of wanting to run off to have an affair with the grocery clerk when we go shopping. He thinks the handyman we got to clean our gutters is just hanging around to get close to me when Frank is napping. And so on. When I try to defend myself, he gets very angry. In fact, anger seems to be very close to the surface for him with just about anything. -- Mary

Learn and Lead: Here is some information that Mary needs to know so that she can lead Frank away from his angry delusions of infidelity.

Emotions and Empathy. By empathizing with Frank, Mary

Deflect and Do. An apology can work wonders to deflect anger! Mary's apology:

Entertainment and Enthusiasm. As soon as Frank’s anger decreases, Mary can enthusiastically suggest a distraction—something that will entertain Frank and refocus Frank’s attention away from his negative emotions.

Residual Emotions and Response. Frank will likely forget the incident with the handyman, but his fears remain and can be triggered again and again. The quicker Mary can respond with an apology and then a distraction, the weaker those fears will be.

Next week’s blog will be about dealing with hallucinations.

Helen and James Whitworth are not doctors, lawyers or social workers. As informed caregivers, they share the information here for educational purposes only. It should never be used instead of a professional's advice.

Posted by The Whitworths of Arizona at 5:00:00 AM No comments: