Dear Readers,
We are interrupting our three part series on hallucinations to share a great offer with you. The second blog in that series will be here next week. But right now we want to offer you something to read while you self-isolate and take care of yourselves and your loved ones and so we are giving you our Award Winning Caregiver's Guide for FREE when you buy the bundle at a lower price than we've ever offered. We hope it helps a little.
Jim and Helen Whitworth 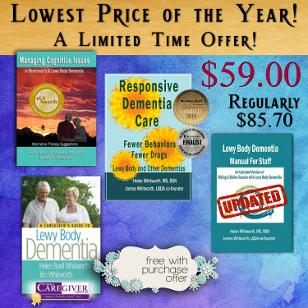 All FOUR of our LBD-related books at the
LOWEST PRICE EVER!
Award Winning Caregivers Guide
Managing Cognitive Issues
Responsive Dementia Care
Lewy Body Dementia Manual for Staff
This is a $85.70 value for a special price of $59.00
THAT'S A $26.70 SAVINGS!

Hallucinations, Pt. 1: What Are They?

Last week's blog was about understanding and managing fluctuations, from a presentation by a mentor of ours, Tanis Ferman, of the Jackson Florida branch of the Mayo Clinic. This next series of blogs are about the other part of her presentation at the 2019 IDLB Conference, understanding and managing hallucinations. I've added some information of our own as we go along too.

Visual hallucinations (VH), or perceived images of people, animals, objects occur in 60-75% of LBD. These images tend to be quite vivid and real appearing. Early in the disease journey, a person can often accept feedback from a care partner that the images aren't real. This is very common in late PD.

At one PD group Fred told us he saw "Little army men." He knew they weren't real because his wife didn't see them. "But, he said, they are fascinating. I enjoy them." However, as Fred's disease progresses and he loses the abstract thinking ability to compare, he must accept only what his own brain tells him. Then his little army men will be real to him.

That's when delusions (false beliefs) related to the image become common. These often become very involved. A friend of our told of her husband, Bill, who "saw" wolves in the back of their pickup and had many stories about their lives there. As with Bill, the hallucination happens and then the brain spins a story to make sense of it--to him if not to anyone else!

Visual misperceptions (illusions) are very common in LBD. This is where an object is mistaken for something else. While these can contribute to delusions, they may also be easier to debunk. For example, a person may be able to accept that the dog they saw on the sofa was really a wadded up blanket that looked like a dog if they can touch it and shake the blanket out.

Visual misidentifications are where a person sees a person, object or location and identifies it as a duplicate or imposter. When the misidentification involves a person, usually someone close to the person, it is called Capgras syndrome. Recent research has found that Capgras is a visual dysfunction. If your loved one believes you are a look-alike imposter, try going out of the room and start talking before you come back into his sight. He will hear your voice and identify it as yours. Then when you enter, you are who he expects to see and who he does "see."

These visual symptoms all occur due to neuron loss in the areas of the brain that control sensory, especially visual, perception. They may also be partially due to an intrusion of dream sleep into wakefulness. Dan, a support group member tells about his deceased wife, Anita. She used wake up thinking someone was ringing the doorbell. Dan would dutifully get up and answer the door but no one was ever there.

Anita started out dreaming about the doorbell. The "sound" woke her up and became an auditory hallucination. Since Anita's thinking ability was diminished she believed the doorbells were real.
Insight, or the ability to tell the difference between reality and hallucinations, is affected when the thinking centers of the brain and their connections to the visual centers begin to fail.

Many hallucinations don't need management at all. If they are not distressing your loved one or making you unsafe, let them be. However, your loved one's reaction to their hallucination can often be stressful, to them or to you or most likely both of you.

Hallucinations can trigger delusional accusations or paranoid worries fostered by negative emotions such as ongoing fears such as a fear of abandonment or loss. In addition, any negative response is apt to be catastrophic, since the dementia-damaged brain doesn't do levels of intensity. Emotions tend to be either very intense or absent.

Next week's blog addresses some ways to manage these more difficult events.

Email ThisBlogThis!Share to TwitterShare to FacebookShare to Pinterest
Labels: hallucinations

This blog is based on a 2019 IDLBC presentation about fluctuations. This week's is by Tanis Ferman PhD, who is based at the Mayo Clinic in Jacksonville, Florida. Tanis is a pioneer in the work with LBD and one of our mentors.

Our bodies all have natural cycles of fluctuation in sleep, appetite, body temperature, hormone controls, alertness and blood pressure.

The fluctuations related to Lewy body diseases are different. They don't necessarily have a regular cycle or rhythm. They affect cognition but they can also affect motor function, communication and even behaviors. These fluctuations are not natural. They are caused by the loss of
These fluctuations are not due to, but may be worsened by:
Care partners talk about the "Good Times" and the "Bad Times." Loved ones may fluctuate between these two poles several times a day. They start out with mostly Good Times and occasional short bouts of "Bad Times." Eventually this changes to the opposite, with mostly Bad Times and occasional Good Times.  During the Bad Times, a person is drowsy, zoned out and unaware. They are easily distracted, tend to use words out of context if they can communicate at all, and find performing tasks difficult or impossible.  During the Good Times, a person is awake, lucid, and aware. They are able to focus (pay attention), can communicate better and can perform tasks more easily.  Managing fluctuations involves:
Thank you, Tanis. Next week's blog will be a review of Showtime, which is probably the most difficult to deal with kind of cognitive fluctuation.

This is the last in a series of blogs about dementia, love and sex. Past blogs have addressed the changes dementia and dementia caring makes in relationships, the changes it causes to a loved one's brain and feelings.

When you are aware of the changes that dementia causes, it is easier to accept these behaviors as a part of the disease and then move on to find ways to prevent or avoid unwanted behavior. That's what last week's blog was about. However, it is likely that you may still have to deal some. This week we discuss how sposues and adult children can use Responsive Dementia Care's last three As to deal with these behaviors when they occur.

Attitude. Developing the right attitude goes a long way towards more helpful actions.
Action. You are the only one who can chose how to act. You loved one can't. However they can mirror your actions, and follow your lead--if they are calm enough to "hear" you. Your goal is to behave in a way that calms your loved one and allows you to access their attention enough to refocus it onto something more acceptable.
For the adult child, the issue is more difficult and embarrassing. Here are some suggestions. Of course, these can also work with spouses:
Averting: Refocusing your loved one's attention by moving the action away from the unwelcome behavior and towards something more acceptable. Such distractions work because dementia makes it difficult to think about more than one thing at a time but ONLY if you have validated your loved one's feelings enough to get their attention. If they are still strongly focused on what they want, your efforts will fail.
Finally, remember nothing works for everyone. You will likely have to try a variety of things to find out what works best with your loved one. Feel free to share what you've learned in the comments below.

Next week is about cognitive fluctuations, a subject discussed at the 2019 National DLB Conference by LBD expert, Tanis Ferman.